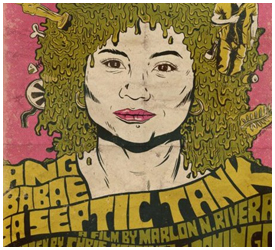 “Ang Babae sa Septic Tank chronicles a day in the life of three ambitious, passionate but misguided filmmakers as they set out to do a quick pre-prod at Starbucks, a courtesy call to their lead actress, Eugene Domingo, and an ocular inspection of their film’s major location, the Payatas dumpsite.  Director Rainier, Producer Bingbong and Production Assistant Jocelyn are well-to-do, well-educated film school graduates who are dead set on making an Oscar worthy film.  They believe they have a winning script, the energy and the drive to make their dreams come true.  Like most filmmakers they know, they have devised a screenplay that will show the real essence of our culture: poverty.  In the course of one day, they brainstorm and exhaust all possible treatment of their project: the story of Mila (Eugene Domingo), a mother from the slums, who out of desperation to survive, has sold her child to a pedophile.  As they discuss the possible executions of the story, the movie-within-a-movie gets reborn in Jocelyn’s imagination several times.  As a gritty no frills neo-realist film, as a glossy musical, as an over-the-top melodrama and as a docu drama using non-actors. For their last task of the day, they visit the dumpsite for the first time.  As filmmakers gunning for authenticity, they get excited with the ”beauty” of the squalor around them.  Soon enough, they are faced with reality as they come face to face with the real effects of their chosen subject.  Babae sa Septic Tank is a comedy about misguided ambitions, the art of making art and the romanticization of poverty.”

Can I just start this by saying that there are a lot of wonderful films in Cinemalaya this year? I don’t know if you can still call the films in Cinemalaya “indie,” because they now also share traits with their mainstream counterparts. And I think this is a good thing.

We write stories so others can read them; we make films so people would watch them–and in this year’s Cinemalaya, we actually have films that people from all walks of life will want to watch. I myself have always gone for entertainment value, watching movies that I know would either entertain me, or whisk me away from my real world problems. Which is why I’ve never been fond of many “indie” films. Why would I want to see the desolation of my country on screen when I can see it right outside the theater?

I haven’t gone off-tangent, mind you, as this is the subject of Ang Babae sa Septic Tank–a group of friends wanting to make a film that would make a statement about poverty. Except this group really knows nothing about poverty, save for what they see in the “indie” films they want to emulate and what they see in the news. These people’s problems revolve around accidentally leaving iPad chargers at home, or obnoxious colleagues who can’t pronounce espresso properly. What do they know about poverty?

And at the end of the day, what these three friends really want to do is be famous for winning awards abroad. They don’t really care about the squalor and the depression of the poor.

Ang Babae sa Septic Tank, from the way I understood the film, is a parody. And at the middle of it all is Eugene Domingo playing a larger-than-life version of herself. While the story actually revolves around Bingbong (JM de Guzma), Rainier (Kean Cipriano) and Joyce (Cai Cortez–a scene stealer, even without dialogue!), the friends who want to make an award-winning “indie” film, the real star of this story is the caricature of Eugene Domingo who wants to do something that will not earn her lots of money–which is, obviously, a parody of many celebrities who feel that they get street cred when they appear in an “indie” film regardless of how bad the material is.

And you know what? I’ve never seen a parody pulled off as successfully as Ang Babae sa Septic Tank was able to. The people who watched the film with us were howling with laughter at the right parts–and keeping quiet at the parts where one is forced to wonder about the state of cinema in the Philippines–especially in the “indie” world where we escaped the trappings of commercialism, only to be trapped by a new set of conventions that shouldn’t exist in the first place.

What makes an “indie” film? I don’t know the answer to that question. What I do know is that there shouldn’t even be an “indie” in the equation. The question filmmakers must ask themselves is “what makes a good film” and take it from there. If they’re having problems answering that question, they should watch Ang Babae sa Septic Tank.

Ang Babae sa Septic Tank is one of the entries to Cinemalaya 2011, which runs from July 16 to July 23. It also has play dates at Greenbelt during the same time frame–and I hope a wider theater release after the festival.