last july, chachic posted about this book called TALL STORY. i wasn’t that intrigued with the book cover, truth be told. but reading chachic’s post changed my mind about the book.

i don’t know if this should be considered as a children’s book or if it’s young adult, but i do know that it is very well written.

TALL STORY tells the story of siblings bernardo and andi. one of them grew up in the philippines, the other one was raised in the united kingdom, and both of them are about to have their worlds collide.

we meet andi first, and she’s a very no-nonsense teenager who was forced to grow up on her own because her parents are always at work, trying to give them a better future. she’s small, which is not unusual for those with filipino blood, but she doesn’t let this stop her from pursuing her passion in basketball.

on the other hand, bernardo is a giant. not literally a giant, but at eight-feet, he literally towers over everyone — even foreigners who are usually taller than filipinos. growing up in the philippines without his immediate family, bernardo because the son of the town. sort of. everyone knows him ever since he was small, and he is even hailed a hero for something he has done! and he’s a big basketball fan too — he just isn’t as good a player as his sister is.

both siblings have baggage, and that’s what the story unravels as it goes along: baggage that would tie two separate worlds into one.

TALL STORY is a story of acceptance, a light family drama; it is also a story of superstitions, of myths and folklore that many filipino take as fact. and, ultimately, it is a story of two cultures meeting, and doing its best to get along with each other.

i don’t think my post about this book does it justice. so to conclude, i’ll just say this: if you find a copy of this book, buy it. read it. treasure it.

i’ll say this right off the bat: this book doesn’t live up to her castle series.

okay, so maybe the book isn’t half-bad. it’s actually quite a fast read, which is a good thing: because it engages the reader, and you can’t put the book down. but i’m not quite happy with how it all sorts itself out.

now, my biggest problem is this:

“THE VISITOR WAS ALREADY THERE. It was enormous. There was a fitful moon that was rushing through smokelike clouds and Aidan could see the visitor against the sky, towering over the woodshed, stooping and strange. It reached out a piece of itself….”

i’ve put off buying this book because of the blurb, which you can find at the back of the book. and you know what? aside from the name aidan, nothing from that blurb appears in the book. not even mentioned in passing. that scene does not take place at all.

which is a good thing, i guess.

ENCHANTED GLASS has an interesting mix of characters. you get the accidental-hero in andrew hope, who comes into everything through an inheritance left by his magician grandfather; there’s the subject of everyone’s attention in aidan cain, the young boy who travels across england for sanctuary from strange creatures chasing after him; and then there’s the mysterious mr. brown who seems to be trying to take over the land that was left to andrew hope.

the three are joined by a series of supporting characters who, for the most part, are not very integral to the story. we have stashe, the token love interest, who seems to have been saddled with the job of moving the plot along; we have tarquin as the wizened not-quite-old man who is tasked to be the encyclopedia of all things magical; there’s mr. and mrs. stock who aren’t married nor are related and are just there; and, well, quite a lot more.

i’m actually sad that i didn’t like the book. it has so much potential, but i felt everything was quite rushed and never fleshed out. the plot is interesting enough, and each character does have enough in them that you’d want to find out more, but nothing gets explored much–which is weird considering the fact that the book has quite a few chapters wherein andrew and aidan are doing nothing but walking and exploring.

and, i think, that’s ultimately my problem with this book. it’s all about exploring, and looking for something that used to be there, and things that are supposed to be there, but nothing ever gets found. and during the times that things are found, or remembered, there is no actual pay-off because you never actually saw the journey of finding it–or remembering it.

i loved HOWL’S MOVING CASTLE, CASTLE IN THE AIR and HOUSE OF MANY DOORS. these three books make up the castle series, and they make up the bar to which i hold my expectations for any other diane wynne jones books. but with ENCHANTED GLASS, i’m not very confident i will like any of her other books. 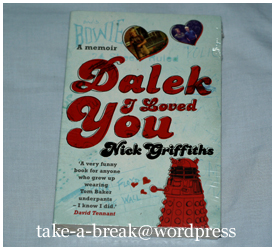 i’m a late DOCTOR WHO convert–a very late convert. i’ve been intrigued with the show since it came back in 2005, but never got around to watching it until 2010. yep, it took me five years.

what held me back? the promise that british sci-fi television shows have lousy sets and special effects. this shouldn’t have bothered me in the least, seeing as i’ve been watching a lot of local shows. but it bothered me.

still, by the third season of the new series, i’ve been reading a lot about how good the stories are, so i figured, bugger it. i’m gonna give DOCTOR WHO a chance. and then fear grabbed a hold of me. what if i don’t understand anything? they changed doctors and all, but in 2008, david tennant was already in his second year as the doctor. and billie piper was gone. how the hell was i going to catch on?

and then, also in 2008, they announced that david tennant was leaving. or rather (and i looked this up on wikipedia, so forgive me if this information is false) he announced it himself. there were already talks of casting a new doctor, and that’s when i decided that i really am going to watch DOCTOR WHO.

honestly though, i forgot about this promise until 2010. and by then, matt smith’s eleventh doctor was staring me through so many web ads in websites i frequent. and then i took a deep breath, and jumped.

granted, i hated the daleks in “victory of the daleks”. i thought that as villains, they looked very rubbish. of course, i changed my mind in “the big bang”, but that was still some episodes to go.

but back to the book. upon taking it off the shelf, i thought it was a work of fiction. my eyes weren’t quick to spot the “a memoir” bit on the upper left corner of the book. and then i saw it, and i decided to let the book go.

five minutes later, i was holding it again. against better judgment, and a long list of credit-card purchases, i bought the book.

i didn’t actually go around to reading it until after i finished off my book pile. which i did last week. and then things-to-do just started trickling in, and i never found time to read the book. and then today, i got lazy and just lazed about–and read the book.

this is actually my second memoir. the first one, A LITTLE BIT WICKED, was kristin chenoweth’s autobiography. and well, DALEK I LOVED YOU is the memoir of a person i don’t even know. i only bought it because it was related to DOCTOR WHO. but i wasn’t disappointed.

yes, it does get tedious reading about someone else’s life. heck, i read about my life and i get bored by it. but there’s something different about reading about growing up in the united kingdom, reading about a-levels and pubs, and about following your heart–so to speak; i thought it was a great read. or if not a great read, a very enlightening one. i guess it’s the fact that the author, and the subject of the book, is set up in a different country with different customs and different upbringing–

and he’s been around a couple of decades before me. so there’s that too. from what he’s written, life back then was very peaceful. and it only started to change for him a couple of years before i was born.

how do i know this? he mentions in his book a period in his life when a lot of bad things were happening everywhere else in the world–and one of said bad things was the assassination of benigno aquino. that happened in 1983.

so yeah, DALEK I LOVED YOU is full of interesting stuff. but i don’t think i’ll be recommending it to anyone who doesn’t have interest in DOCTOR WHO. and even then, i’d ask you first if you really, really want to read the book. 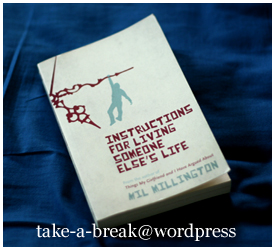 i found INSTRUCTIONS FOR LIVING SOMEONE ELSE’S LIFE while waiting for my sister at fully booked (the block) one afternoon. i really wasn’t searching for anything in particular, but i take note of intriguing titles. yes, i’m a titles-person.

this was one of three books i bought that day, all of which have nothing to do with my usual fare: fantasy. though, in a way, all of them are also rooted in fantasy.

in this particular case, the main character is twenty-five year old chris who got piss-drunk back in 1988–and woke up suddenly in 2006 with a life very different from what he had probably intended.

being twenty-five myself, i related a lot to the main character.

it’s not a spectacular read, if you want to know the truth. it was just okay. i could bring myself to put down the book if i needed to do something else–even if that something else isn’t even remotely important. but being the type of person i am (i must finish everything i started–except TWILIGHT.) i kept going and going until i finished the book. it took me three days.

i’m not saying the book wasn’t good. well, i am saying that. but it wasn’t badly written. it was entertaining, and a little thought-provoking. but at the end of the day, it wasn’t a book you leap into. not something someone would have to kill you for, just so they could take it off your hands.

one of my criteria for a really enjoyable read is if the book makes me hold my pee. you know the feeling? when you absolutely have to go, but the book is so interesting that you couldn’t be bothered to stand up and head to the toilet? that only happens with books you really, really enjoy. and there has been a case when i took the book with me to the toilet, just because i really needed to go and i still didn’t want to put down the book.

that didn’t happen with this book. i actually just read the thing right before going to bed.

but, i have to say, INSTRUCTIONS FOR LIVING SOMEONE ELSE’S LIFE is a perfect way to jump start this blog. it’s literally about a character who took a break from his life for almost two decades.