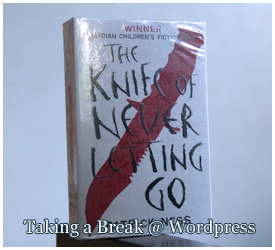 “Todd Hewitt is the last boy in Pretisstown. But Prentisstown isn’t like other towns. Everyone can hear everyone else’s thoughts in a constant, overwhelming, never-ending Noise. There is no privacy. There are no secrets.

Just one month away from the birthday that will make him a man, Todd unexpectedly stumbles upon a spot of complete silence.

Prentisstown has been lying to him.

And now he’s going to have to run…”

This is one of those books that everyone keeps recommending, but I never really found the desire to read—much less, buy. But whilst killing time at the mall, I found myself being drawn to the bookstore. And though I still had around a dozen books left to read, and an Ilustrado that’s still waiting for me to finish reading it (and maybe because of this), I decided to give The Knife of Never Letting Go a chance. This time, learning from the Twilight mistake, I only bought the first book from the Chaos Walking trilogy.

After the first couple of chapters, I was happy with my decision not to buy the second and third book—because I found the story absolutely boring. I did not love The Knife of Never Letting Go.

Well, not at the beginning anyway. The author’s choice of storytelling was confusing and infuriating.

And then there was no Noise.

And then there was a girl.

And then, I understood.

The way Patrick Ness, the author, structured the story is for the reader to discover the secrets at the same time as the protagonist. Infuriating, as I said earlier, but it made for compelling storytelling—once we got to the part where something actually starts happening, when Todd first encounters the gap in the Noise. Prior to that though? I was ready to strangle Todd myself.

As the story commences though, it becomes tough to put the book down. You wouldn’t want to. Because the world Patrick Ness creates, a real New World if there ever was one, is so complete, so real that you can’t help but picture yourself in it.

No, it doesn’t have minute descriptions of the moss that grows on the rocks that our protagonists pass by. But the atmosphere created by the way our hero describes how he feels about everything, about the new things he’s seeing, it’s enough to create the world. You fill in the blanks with your own experience of the world we’re in.

And for me, that’s better than describing the texture, the color, and the other what-nots. Because by letting us, the readers, color in the world, we’re giving part of ourselves to the story. We’re becoming part of the story. And that in itself, I think, makes the book engrossing for a reader.

And that feeling of connection, how to book draws you in into its world, is enough for me to recommend this book to anyone looking for anything to read. Seriously.

I’m not going to write about how well-written the story is, or how I’m not a fan of the spelling that Mr. Ness employs for the dialogues. I think that’s been done enough by other people who’ve read the book and written about it before me.

I’m basing my recommendation on the fact that The Knife of Never Letting Go is one of the most engrossing books I’ve ever read.

Still, if you’re the type of person who wants a review, here are some blogs where people actually do a review:
Dodging Commas
District YA
Chachic’s Book Nook

2 thoughts on “Book: The Knife of Never Letting Go”