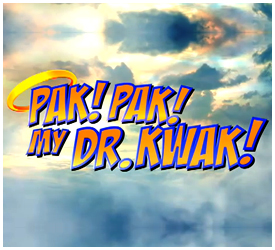 I am all for promoting Filipino films in my blog, but this… How do I start?

Pak! Pak! My Dr. Kwak! is a romantic-comedy film that tackles the question: what happens when science meets faith? Vic Sotto plays a faith healer Angelo who clashes with a Cielo, a doctor, played by Bea Alonzo. But when a punished angel falls down from the sky and into their lives, the two learns that their ways of healing can co-exist—if they would only let it.

It’s a pretty basic story that follows the Vic Sotto movie formula: guy meets girl; girl is enamored by guy—but knows that they are incompatible; guy and girl starts to go out—but guy has one principle that goes against what girl is in his life; guy and girl makes a compromise, and they live happily ever after. Of course, we can’t discount the life-and-death situation that invariably crops up in all Vic Sotto movies—but I won’t say who almost bites the dust in this movie.

I’ve accepted this formula, and I am absolutely fine with the fact that many Filipinos (if the full theater last Saturday was any indication) find his brand of humor funny—regardless of the formula. Heck, I’ve even accepted the fact that Vic Sotto is getting partnered with a female lead who is decades younger than he is! But something about this movie rubbed me the wrong way.

Is it the fact that Bea Alonzo was reduced to a sniveling, whining b*tch who falls in love at a drop of a hat? Is it because of the mischievous angel who’s supposed to carry the morale of the movie doesn’t really show any angelic qualities aside from the “let’s pray” and “you have to do good deeds” mantras? Or maybe it’s because the movie glorifies faith healing, and then takes it back by suddenly saying that it is alternative medicine?

I don’t know who wrote the script for Pak! Pak! My Dr. Kwak! And I have nothing against him, her or them. But I have to ask, was there really a need to make this movie? Sure, from a financial and marketing point-of-view, I guess there is. But couldn’t they have written a different story that could’ve used both Vic Sotto’s and Bea Alonzo’s strengths? I’ve seen Vic Sotto in a very dramatic role, and he can pull it off. Bea Alonzo does seem to have comic timing from what I’ve seen of her work. So why weren’t these utilized in place of the cheap laughs?

If you’re going to say no one forced me to watch the movie, well, no one forced you to read this post either. And, actually, I was forced to watch the movie—by my mother who is a big Vic Sotto fan. So I’m writing these thoughts online just so I wouldn’t feel the PhP170 paid for my ticket doesn’t actually go to waste. Yes, it’s 20 pesos more expensive than Beastly, which wouldn’t bother me had the movie been any good.

But it wasn’t good. And it made me really sad listening to the people inside the full theater laugh out loud at the jokes that made fun of people’s looks, and their misfortune; and it made me even sadder that people would watch movies like this in droves, and wouldn’t watch good films, also produced locally, like Senior Year.

Is there still hope for Philippine Cinema? Or will we be subject to films like this because this is what the masses want? I’m not being pretentious. I’m not saying we should only watch quality films where we can learn. I’m all for entertainment, and escaping through means of film. But can’t we do that while maintaining some standards? Just a little bit of standards. Like, you know, not supporting comedy films that aren’t really funny if you take out all the mean things said about people who aren’t as good-looking as the lead stars.

What do you think?