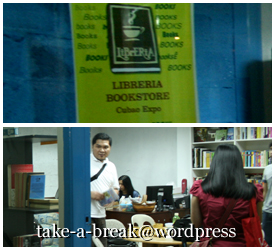 the second filipino book bloggers meet-up had a lower turnout than the first one. but that doesn’t mean it was less fun! the bloggers who attended were: chachic, tarie, aaron, will, kenneth, blooey, michelle, peter, peter’s friend (whose name i wasn’t able to catch), and honey.

the second meet-up was held at libreria, a new bookstore located at cubao expo. it has a wide variety of books (including a few hard-to-find ones that some attendees were quick to buy), has coffee and cookies, and most importantly, it has a table in the middle that became our venue for discussions.

the owner, triccie, was very cool and very accommodating. she even gave everyone bookmarks! and so was kenneth, who treated the early birds to coffee. well, those who drank coffee anyway. he also handed out free copies of the christmas issue of PHILIPPINE GENRE STORIES. thank you, triccie! thank you, kenneth!

now, onto the discussions. that i remember.

one blogger voiced out that if no one links to negative reviews, how will the author know what people don’t like about the book he/she had written. while one blogger defended that if an author wants to read negative reviewers, he or she could do a google search herself.

personally, i am siding with the “don’t link” group. recently, i’ve been writing less-than-lukewarm reviews. and i didn’t (and still wouldn’t) link it to the author’s pages. one, because i agree with the idea that if a person wants to read negative reviews, he or she can do a search him/herself. also, it’s like inviting fans to go to your blog and defend their favorite author on your blog. it’s not a win-win situation. 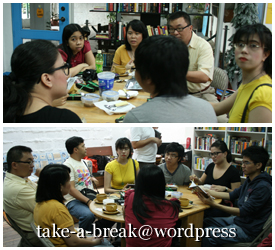 then came the discussion on reviewing works where a friend is involved. tarie has a great system in which she promises to feature everything sent to her–but she gets to choose on how she will feature the work: which ranges from book reviewing, to interviewing the author, to hosting memes where she can just mention the book.

this, she says, also works for when she ends up not liking a book. instead of posting a negative review, she’ll just pick a different way of featuring the book.

kenneth was the one who brought up the issue of plagiarism in the philippines–which affects writers, and readers like us. but with this issue, most everyone just wanted an update on what’s currently happening with the court proceedings regarding this. everyone in attendance was against plagiarism. as we all should.

there were other discussions too, which i hope someone else remembered.but the only ones i remember now, aside from the ones i mentioned above, are: when to meet next (january, at libreria again); filipino book bloggers will now feature different bloggers to lead the filipino friday meme (kenneth will start next week); and kenneth is accepting stories for the next issue of PHILIPPINE GENRE STORIES.

this time, we also got to do a little getting-to-know you discussion. of who we are and what our blogs are about. some of us even answered the current filipino friday question, which is about how blogging affects our real lives, and vice versa.

and those are the things i remember being talked about. i should take note of what’s talked about in the next meetings.