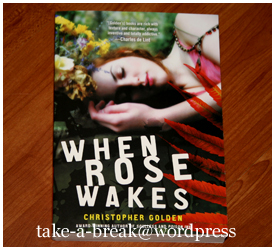 i was pleasantly surprised to find a copy of WHEN ROSE WAKES at a local bookstore, seeing as how i’ve always had a hard time looking for christopher golden titles in the philippines. i guess the trick is not to look for them, and they’ll just pop out of nowhere.

WHEN ROSE WAKES is a retelling of the fairy tale SLEEPING BEAUTY. well, it is sort of a retelling.

the story goes like this: teenage rose, the titular character, wakes up from a coma with no memory of her life before her coma. she has two very eccentric aunts who are very old-fashioned, and not a little weird. and cherry on her cake: she keeps having strange dreams where she has the starring role in a vicious version of SLEEPING BEAUTY.

and then there’s her aunts biggest rule that rose isn’t certain she can follow: never get involved with boys.

rose is a teenage girl about to rediscover what it is to be a teen. how in the world can she not get involved with boys?

WHEN ROSE WAKES reads like a chic-lit at first; with rose as the main character, you follow her journey as she sets out to rediscover what it is to be a teenage girl. and throughout the story, you get glimpses of her dreams which clearly shows that something supernatural is going on. so it’s a supernatural chic-lit.

it’s another solid book from christopher golden, and it has a great twist on the very familiar story of SLEEPING BEAUTY. to understand what i’m talking about–well, you’ll just have to read the book!

6 thoughts on “book: when rose wakes”